With last week’s record-breaking release of Star Wars: The Force Awakens, excitement over Disney’s new Star Wars franchise possibilities has never been higher. That’s why Disney’s recent announcement and events regarding their new 14-acre Star Wars Land in Disney’s Hollywood Studios has many excited about this new destination. 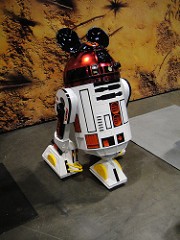 At the beginning of December, Disney opened their new Star Wars Launch Bay in anticipation of the movie’s release. Guests to the Launch Bay were able to visit special exhibits showcasing the new movie, and had the chance to meet Chewbacca and Darth Vader. Likewise, Disney’s Jedi Training Trials of the Temple—which also opened in early December—allowed younglings the chance to train as a Jedi, and test their newly-acquired skills against Darth Vader and Star Wars: Rebels villain The Seventh Sister.

According to a Disney Parks blog post on the D23 EXPO 2015 announcement about the park, Star Wars Land promises to give guests the chance to visit “a never-before-seen planet, a remote trading port, and one of the last stops before wild space where Star Wars characters and their stories come to life.” At fourteen acres, the park is expected to be the largest single-themed expansion ever to be constructed at both the Anaheim and Disney World parks, including signature attractions such as the opportunity to pilot the Millennium Falcon.

During construction, which is scheduled to begin in 2016, guests will no longer be able to attend Star Wars weekends. If you missed your chance to visit the park during one of these spectacular events, don’t worry—according to another official Disney Attractions blog, “While Star Wars Weekends has been a great way to enjoy the saga for a few days every year, now the Force will be with Disney’s Hollywood Studios every day.”

Interested in booking your Star Wars vacation? Keep checking back to DVC Land’s blog for more information on Star Wars Land’s opening schedule. If you’re not a Star Wars fan, don’t worry! Our resorts have more than enough to keep you occupied. Book your vacation today!